Years ago, Judge Phillip Trompeter helped the daughter of a friend of mine. He gave her some tough love, and today she is married, studying nursing and has two children of her own and doing well.  He played a big part in it. This was one of those Retirement Caricature commissions that I really wanted to have turn out well, in part because he was familiar with who I was as I have drawn for the Children’s Trust and CASA in the past.  The downside was my out of town trip to a Florida Gig gave me only a few hours when I returned home to get it drawn, framed, and delivered…so it felt rushed.  They were thrilled with it…but I would have probably spent the better part of two days on it, instead of 2-3 hours.

The good news is any man wearing a Bow Tie just is going to make for a good cartoon.  His favorite saying “Breaking the law is nothing more than bad manners!” and his reputation for having being a generous and happy disposition made it a joy to draw.  As I researched him on google,  I realized there were so many things he had helped in that by extension, had made a difference in my life.

The domino affect.  Start one good deed, and you may not know who will be at the end of the line to get the blessing.  I am sure that even though he has retired, he will still be making a big difference for  good in this valley and region. 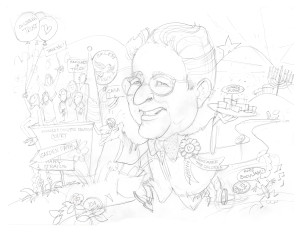 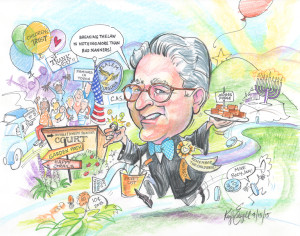 Call to discuss rates or to reserve your date.